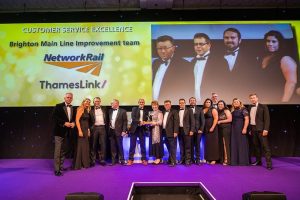 Network Rail was also highly commended in the Infrastructure Achievement of the Year Award and jointly with GTR in the Outstanding Teamwork category.

The Brighton Main Line project involved a nine-day closure between Three Bridges and Brighton and Three Bridges and Lewes over the February half-term this year. The work was a key part of the £300 million government-funded programme to tackle delay hotspots and boost the reliability of the railway in the south east, including the expanded Thameslink network.

Because of the potentially massive impact on passengers, a Network Rail and GTR team had to devise suppression and alternative capacity targets and develop a communications programme and integrated package of travel options, to give passengers choice.

This involved the largest bus replacement service ever mounted in Europe, recruiting and training Brand Ambassadors to manage the bus hubs and extensive customer communications, distributing more than one million leaflets to passengers, an email programme, plus website and social media feeds. The team also worked closely with local businesses, MPs and councils.

An independent passenger survey showed a 90 per cent level of awareness of the programme with 89 per cent of those polled saying they supported the work and 86 per cent described the engagement as positive.

John Halsall, Managing Director for Network Rail’s Southern Region, said: “Putting passengers first was at the heart of this work. We recognise that there is never a good time to close a railway and doing so for nine-days would affect many people.

“Our aim was to ensure passengers were aware of the closure well in advance so they could plan their journeys and look at the alternatives. This award is a recognition of the hard work and dedication of everyone who was involved. It was a real team effort across the industry.

“Without this programme of work, reliability on the Brighton Main Line would have continued to deteriorate leading to more delays for passengers. The closure meant engineers could work round-the-clock and carry out vital improvements to signalling, Victorian tunnels and stations. The work was completed and handed back on time.”

Keith Jipps, Infrastructure Director for GTR, said: “The Brighton mainline closure was a massive challenge as it was going to impact tens of thousands of our passenger with five of the days being part of the normal working week. The collaborative working between GTR, Network Rail and all the other organisations that delivered the closure was exceptional. Collectively our main aims were to provide as best a service as possible for our passengers during the closure and ensure that we took every opportunity to improve the critical parts of the infrastructure and stations that would provide passengers with the improved service reliability that we were looking to achieve and that they deserve. I am very pleased that the Rail Awards recognised the great work of our teams.”