Britain braces for a weekend washout 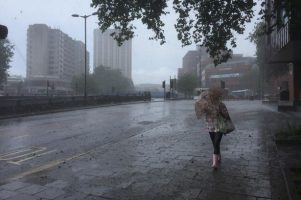 Weather experts have said that there are high chances of Britain being washed out by another severe bout of showers this weekend. Most areas in the UK are supposed to experience some rain, as per the Met Office. The heavy onslaught is anticipated to start steadily on Monday morning with patchy showers in Scotland and into the north and east of England. Northern Ireland is also likely to experience showers or longer spells of damp conditions.

Northern England and Wales have also been anticipated with hill fog and drizzle.“Now southern counties and East Anglia are supposed to see some cloud breaks, some brighter spells along with heavy downpours, perhaps a thunderstorm or two around the channel coast. However, the downpour is supposed to dry up in the afternoon for East Anglia in the southeast but it is likely to increasingly wet for the southwest of England as well as parts of Wales.”

Particularly wet conditions have been forecasted across Devon, Cornwall and South Wales.

Some heavy and prolonged rainfall for Wales has also been predicted which is likely to move into northern England and southwest Scotland.

Central Scotland and Northern Ireland are expected to experience the heavy rainfall on Saturday in the early hours.

Met experts have predicted clearer skies in the far north of Scotland with just one or two showers on Saturday morning. However, most places are likely to start off with a lot of clouds.

As per experts, very few places will not experience shower on Saturday and the far north of Scotland is supposed to be largely dry but cloudy.

Some breaks in the clouds will also happen and drier interludes going into the southeast.