British Airways Airbus A350 collides with Emirates Boeing 777 in Dubai 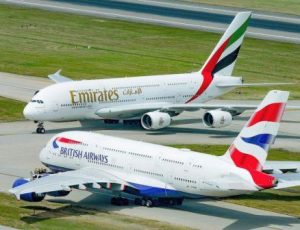 A British Airways carrier, Airbus A350 has crashed with an Emirates Boeing 777. The incident took place at the Dubai International Airport. It has been reported that the A350 was being pushed back when it struck the Emirates aircraft in Dubai. The collision happened on the tarmac causing serious damage to both aircraft.

According to reports, the Airbus A350 was pushing back from its gate and was about to operate a cargo flight to London at the time of the crash. While it was being pushed back the horizontal stabiliser of the British Airways carrier collided with the Emirates aircraft and pierced into its rear.

The crash would also cause financial loss to both the companies as the repairing cost is expected to be very high. Both aircraft cost more than $500 million and both airlines are operating a minimal number of passenger flights due to the COVID-19 pandemic and related travel restrictions. However, at present, it is unknown as to how much priority would be given to repair the two aircraft amid the current global situation in wake of the coronavirus outbreak and the plight of the aviation industry. Their capacity likely won’t be missed in the near future.

Dubai’s flag-carrier Emirates officially informed in a press statement that on Tuesday, another airline’s aircraft made contact with a stationary Emirates aircraft at Dubai International Airport. It also informed that there is no record of any injury and the incident is under investigation.

Meanwhile, a British Airways spokesperson mentioned in an official statement that the airline has always prioritised safety above everything. The airlines also said that the aircraft will be fully accessed and examined before it is allowed to fly again.

The Airbus A350s are some of the newest British Airways aircraft. The oldest A350 is also one of the few aircraft that was flying amidst the crisis despite a large portion of the British Airways fleet being grounded. On the other hand, the Emirates Boeing 777 last flew just on Monday from Riyadh to Dubai.