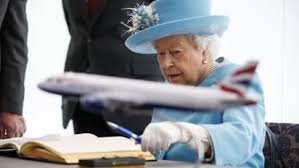 For the airline’s centenary celebrations her majesty the Queen has visited British Airways’ headquarters at Waterside.

She visited the British Airways’ museum, the Speedbird Centre  where she was shown artefacts and memorabilia concerning her historic journey with the airline throughout the reign.

Photo of her own first Commonwealth tour in 1953, after her coronation was also there. She was also introduced to the colleagues in heritage uniforms.

Her majesty was also introduced to members of the airline’s community Investment team and champions from around the company who raise money for Flying Start, British Airways’ charity partnership with Comic Relief during her visit.

Alex Cruz, British Airways chairman felt honoured that her majesty the Queen has chosen to visit them on this very special occasion to help to mark our centenary – a landmark in aviation.