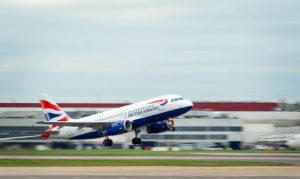 Heathrow today announces that ’ short-haul fleet has topped the ‘Fly Quiet and Green league table’, based on its environmental performance from January to March this year.

The UK’s flag carrier airline reached the top spot because of improved Track Keeping and the increased use of Continuous Decent Approach during its short-haul flights. The former means that the fleet is consistently keeping to the routes designated by air traffic controllers, helping to guarantee periods of noise respite for local communities. The latter means that the airline is making more efficient use of its engines on landing. Combined, these actions help to reduce fuel burn and ensure that these planes are flying more quietly and accurately.

British Airways’ first place position in this league table sets a strong example for other airlines to follow. If the biggest carrier can make changes at scale, so can others.

British Airways’ long-haul fleet also featured amongst the top 10 airlines in the league table, moving 10 places up to sixth due to improved track keeping and fewer early and late departures.  Other top performers include Scandinavian Airlines, which remains in second place, and United Airlines, which has climbed up seven places since the last quarter to 3rdplace. Icelandair also returns to the Fly Quiet and Green league table after a two year hiatus, placing 32nd.

The league table also takes into account the emissions per seat, the amount of noise generated by a plane in relation to the number of passengers it is able to carry, aircraft age and emissions standards – with newer planes such as Boeing 787s and Airbus 350s amongst the most green and quiet.

The league table is just one of the measures that Heathrow is using to incentivise airlines to bring their greenest and quietest aircraft to the airport. Other measures include the restructure of the airport’s environmental charges in 2017, which saw airlines operating newer and cleaner aircraft charged four times less, encouraging sustainable fleets at the UK’s only hub airport. Heathrow also runs a carbon offsetting project, which sees the airport work with DEFRA and the Lancashire Wildlife Trust to restore Peatland Bogs that will ultimately act as carbon capture.

Later this month, Heathrow will be unveiling its masterplan for expansion, which will lay out how the airport plans to expand in a way that is sustainable. Consultation documents will include details for managing emissions from aircraft and ground vehicles as well as the wider plans to expand in a carbon neutral way.

“As we prepare for growth, work continues apace with our airlines and the wider industry to ensure our plans for carbon neutral growth become reality. Building the third runway is not a choice between expansion and the economy – it will enable the UK to flourish post Brexit, whilst mitigating against the worst effects of climate change. If the industry works together to decarbonise the sector we can still travel to all corners of the world on more sustainable planes, having flown from carbon neutral airports.”