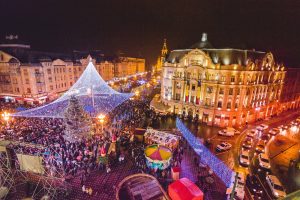 Bucharest Christmas Market will is all slated to open in Constitutiei Square on November 28. The free-entrance market will be open until December 26.

From a Christmas tree of over 30 meters to a merry-go-round, an ice skating rink, and over 130 stalls with traditional food products mulled wine, hand-crafted items, season decorations among others, the market will have everything.

Creative workshops will run parallel at Santa Claus’s House for children where they will be able to drop the letters for Santa.

The opening day of the market will see performances from the Children’s Radio Choir, Lidia Buble, Voltaj, Loredana and Banda Agurida.

People can donate books and toys for underprivileged children at a donation point in the market.

The market is organized by the Bucharest City Hall through Creart center.

The restaurants, bars and hotels in the city are also preparing for the Christmas party. Many places in Bucharest promise vibrant events with different themes, most of them including delicious menus. One needs to choose a favorite location, as the city has a number of options for bars, clubs, concert venues, restaurants or hotels.