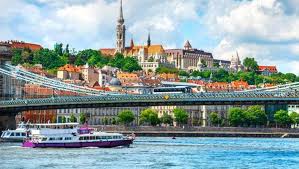 Tourism in Budapest is booming. Registered guest nights in the capital were up 8% last year, reaching a record ten million. In Hungary, guest nights show a 70% rise since 2009, when the economic crisis hit. Such numbers are attracting both domestic and global interest, according to Péter Kraft, a former ambassador who runs his own eponymous tourism consultancy.

Kraft said, “Hungary’s tourism is continuously performing very, very well. We sometimes ask ourselves why are we so successful?” Kraft spoke about the ever increasing offering of cultural events, “world-class” public transport and a safe environment in the capital to stupendous night-time illuminations as important factors for attracting global interest.
For Kraft, the attractions are clear: “In the hotel business, if [properly run] you have, say 45% occupancy, you cover the expenses, and you are able to pay back the loans. If you have an occupancy of 60%, you are making a reasonable return. If you have 70% and over, that is a cash machine!”

On the domestic side, the tourism boom has attracted leading business interests that have previously steered clear of the sector.

“One of the industrialists from among the 100 richest men in Hungary came to this office and told me that he’d decided ‘to have my own hotel. Can you get one for me?’ So we are looking for a hotel now, for him, in the range of EUR 10 million–20 million,” said Kraft.
International hotel companies, “mostly from Europe”, are also eyeing expansion in Budapest.

“A hostel may have eight or ten beds to a room. At EUR 14 per bed, that makes EUR 140. With a high occupancy rate, it means a higher return than a room in a five-star, while the investment is significantly lower. There is business all around!” insists Kraft.

“Today, tourism represents about 10% of GDP. The decision has been made for tourism to represent 16% of GDP by 2030. That is 50 million room nights [per annum]. That is government, national strategy that targets that,” Kraft says. “So, we know where we want to go, and there are plans and these are quantified.”