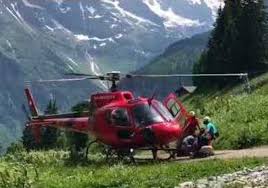 A helicopter evacuated 400 people from Switzerland’s Schilthorn mountain on Thursday morning after the cable car that connects the summit and the town shut down abruptly.

Helicopters were sent to pick up passengers who had been stranded with the cable car stopped at Birg station that is a midway station 8,783 feet above sea level.

The cable car on the 9,744-foot mountain in Bernese Oberland shut down in the morning. Within about 10 minutes of receiving notice, a team of Air Glaciers immediately arrived to evacuate the passengers as per a regional news publisher. By mid-afternoon, all passengers and staff had been brought down from the mountain safely.

The Schilthorn AG company that operates the cable car mentioned in a statement that a technical fault lower down on the mountain stopped the gondola as reported by a reputed news media platform.

Passengers were moved by an alternate cable car to another area on the mountain where helicopters picked them up.

They then disembarked at the Mürren ski station.

Schilthorn mountain was featured in the 1969 James Bond movie ‘On Her Majesty’s Secret Service’, in a scene depicting the protagonist being chased down its snowy slopes by a group of villains on skis. A number of Bond-themed attractions—including a 007 Walk of Fame, an interactive exhibition and the revolving 360-degree Piz Gloria restaurant featured in the Bond film—are showcased at the top of Schilthorn to draw tourists.

Brewing storms factored into the decision to remove all passengers from the cable car, Christoph Egger, director of the Schilthorn Cableway told a news media channel.

Egger said that many people were scared, as it was their first trip in a helicopter, but nobody opted for the alternative of walking down the mountain. It takes 32 minutes by cable car to travel from the base to the peak of Schilthorn, and it could have taken two hours to walk down the mountain.