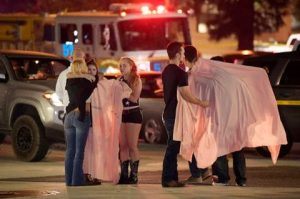 A gunman opened fire at a bar in Southern California that killed multiple people on Wednesday leaving several people injured.

According to an officer with the Ventura County Sheriff’s Department at least 11 people including a sheriff’s deputy.

About 40 miles west of Los Angeles before the midnight local time multiple shots were fired. The police responded to the Borderline Bar and Grill in thousand Oaks, California.

Ventura County Sheriff’s Departmemt and California Highway Patrol officers mentioned that about 30 shots were fired and several injured while hundreds were inside the bar at the time.

The number of potential victims were still unclear a security guard was shot and the alleged shooter appeared to use a ‘a big handgun’ and smoke grenades.

There were smoke grenades all over the place, a gunman pointed gun at the cash register and kept firing.

The country themed bar is known for having a large dance floor and live music events.

Borderline is a haven for the country line dancing folk for all ages with more than 2,500 square feet of wide open dance floor . It has  also hosted many legendary performances like the The Beach Boys, John Rich, Collin Raye, Mark Chesnutt, Lee Brice, Adam Carolla & Tyler Farr to name a few.