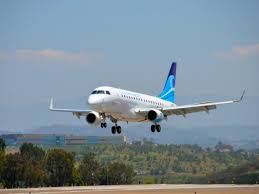 A new airline will start flying from Carlsbad’s McClellan Airport, trying to give North County travellers an alternative to Lindbergh Field.

California Pacific Airlines will take off for the first time on Friday, with a flight to San Jose. They also have flights planned for Reno, Sacramento, Las Vegas, and Phoenix/Mesa by the end of November. The airline already offers flights from Denver to several cities in South Dakota.

Vallas says his airline will offer competitive rates, but travelers will save money in the long run because they won’t have to first drive up to an hour to Lindbergh Field or pay to park.

The airline hit a snag on its first morning, however, having to postpone its inaugural flight Thursday. A mechanical problem delayed the airplane in Denver.

Vallas says that’s not a sign of things to come, noting that his airline will have a fleet of 15 to 25 planes stationed at all cities it serves. McClellan Airport has had problems keeping commercial travel. Last spring, CalJet had to shut down after trying to launch service to and from Las Vegas. The  passengers at the airport this week say they’re excited about the ability to fly out of Carlsbad.