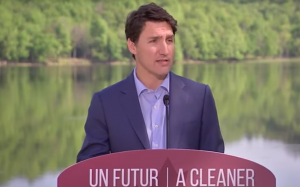 Canada will ban many single-use plastic items by 2021. Prime Minister Justin Trudeau said that it is a problem that simply cannot be ignored. He did not specify the products that will be banned. The likely candidates of single-use plastics include plastic bags, straws, cutlery, plates and stir sticks that are supported by ‘scientific evidence and warranted’.

The Prime Minister added “Plastic waste ends up in our landfills and incinerators, litters our parks and beaches, and pollutes our rivers, lakes, and oceans, entangling and killing turtles, fish, and marine mammals”. He highlighted that less than 10 per cent of plastic used in Canada gets recycled. Without a change in course, Canadians will throw away an estimated U.S. dollars 11 billion worth of plastic materials each year by 2030.

According to the Canadian government, every year 1 million birds and more than 100,000 sea mammals worldwide are injured or die when they mistake plastic for food.

A report by the European Commission found that 80 per cent of litter in the world’s oceans is plastic, due to its slow decomposition. Plastic has been found inside marine animals including sea turtles, seals, whales and birds.

Tthe European Parliament passed a similar ban on single-use plastic items in late March. They plan to recycle 90 per cent of plastic beverage bottles by 2029.

In May, the United Kingdom announced a plastic ban by 2020. Officials estimated 4.7 billion plastic straws and 316 million plastic stirrers are used in England every year.

Plastic ban specially that of single-use plastics would help to reduce plastic pollution.