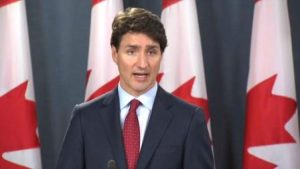 Canadian Prime Minister Justin Trudeau recently announced that the U.S.-Canada border would not completely reopen and is subjected to remain closed for several other weeks. The decision has been taken in light of the COVID-19 pandemic as coronavirus cases continue to rise across the globe.

On Thursday, Justin Trudeau said in a press statement that U.S. and Canada are constantly on talks regarding border issues and supply chains. He informed, that no discussion about the relaxation of border restrictions can be done as of now.

He also mentioned that most countries in the world have restricted travel, and Canada and the United States are no exception. He said that protecting the citizens should be the ultimate priority for any country and hence the reality is that the borders would remain closed for many weeks from now.

Chrystia Freeland, Trudeau’s deputy and point person on US relations added that Ottawa can only ease border restrictions when it does not pose a risk to the health and safety of Canadians. The U.S.-Canada border is the world’s longest international border. On March 21, both the country’s closed the borders to all non-essential travel as a response to the pandemic. Before the coronavirus outbreak and the border closure, nearly $2.4 billion worth of goods and more than 400,000 people crossed the border each day on average.

As of now, the U.S. has recorded around 33,000 deaths while Canada reported around 1600 death because of the coronavirus disease. Two of the worst affected Canadian provinces, Quebec and Ontario, border New York State which is also the epicentre of the U.S. outbreak.

On Wednesday, U.S. Prime Minister Donald Trump said in a statement that the United States would maintain strong border restrictions with nations that had high infection rates. However, he was hopeful that the U.S. border with Canada would be one of the early borders to be released by the country.

Justin Trudeau further said that a special thought would be given to the U.S. – Canada relationship as the countries move forward post the pandemic. He also mentioned that at the same time both countries are aware that there is a significant amount of time remaining before they can discuss loosening border or travel restrictions.

He said that Canada will continue to listen to what science is saying and monitor the evolution of the deadly coronavirus in the country and all across the world before making decisions about travel and restrictions. He concluded saying that Canada’s conversations with America regarding the situation have been extremely aligned and extremely productive.