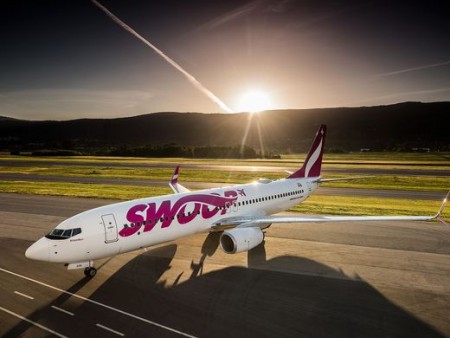 Swoop is slated to become Canada’s first ultra low cost airline to fly to the United States when it launches service this fall to five popular tourist destinations in Florida, Nevada and Arizona.

The subsidiary of WestJet Airlines Ltd. will commence  on October 11 with flights to Las Vegas from Abbotsford, B.C., and Edmonton, Alta., about four months after Swoop began to fly.

Service will be added over the following couple of weeks between Hamilton, Ontario and Las Vegas as well as to the Florida cities of Fort Lauderdale, Orlando and Tampa Bay.

Furthermore, flights between Edmonton and Phoenix will start on October 27 onwards.

Most destinations will be serviced a few times per week but daily service will be flown between Edmonton and Las Vegas.

The transborder service will be launched to these U.S. gateways as Swoop receives delivery of its fifth and sixth airplane, said Swoop president Steven Greenway.

He said in an interview that they really blend well to the model that we provide in terms of low cost, high volume type of leisure profile that we definitely are targeting.