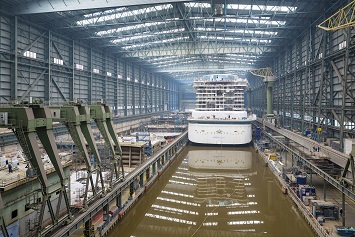 AIDAnova’s future captain has been announced: Boris Becker will be taking command of the new cruise ship. Over the course of his career with AIDA Cruises, he has already commissioned several new-builds, including AIDAluna, AIDAblu and, most recently, AIDAperla. As of now he is working at the Meyer shipyard in Papenburg, overseeing the final construction phases on site.

Born in North-West-Germany, Becker studied nautical science in Bremen, and signed on
with AIDA immediately after graduating in industrial marine engineering. He has
enjoyed a successful career with the cruise company, firstly as an officer, and later as a
staff captain. In 2010, at the age of 30, Boris Becker became AIDA Cruises’ youngest
captain at the time.

On May 30, 2018, AIDAnova proved that water is her element when she was moved to
the water inside Building Dock 2. To this end, the dock was flooded and the cruise ship
floated for the first time. At 5.00 p.m. a maneuver got underway by which AIDAnova
traveled a distance of approx. 140 meters in the direction of the gate with the help of
several cable winches. AIDAnova thus successfully demonstrated her stability and
floatability, reaching a further important milestone of the construction phase.
The next steps are the hallmark painting on the prow of smiling lips, eye and eyelid, the
assembly of the propellers, and the installation of masts and funnel which, because of
the ship’s height of 69.3 meters, can only be done after the ship leaves the covered
building dock.

The highlights aboard this ship which is part of a completely new AIDA generation
include the adventure worlds of the Theatrium, Brauhaus (Brewhouse), Beach Club and
the Four Elements, as well as 21 different kinds of stateroom ranging from Penthouse
Suite to Family and Veranda Staterooms to Individual Staterooms with a balcony.
In exactly three months’ time, on August 31, 2018, AIDAnova will be christened outside
the covered building dock in Papenburg during the AIDA Open Air. Naturally, Captain
Boris Becker will be there, accompanying the as yet unnamed godmother during the
formal christening ceremony. Alongside a spectacular fireworks display, guests will be
treated to a live concert by star DJ David Guetta.

Shortly after the christening, AIDAnova will set out on her first voyage in mid-
September, heading for Eemshaven in the Netherlands. After the ship’s final fit-out and
various trial sailings, AIDAnova will be handed over to AIDA Cruises on November 15,
2018 in Bremerhaven. From that moment on, Captain Boris Becker will be in command
on AIDAnova’s bridge. After a number of exclusive pre-premiere trips, from December 2 Starting on December 2, Captain Becker will take the world’s first cruise ship that can be
powered with low-emission liquefied natural gas (LNG) on her maiden voyage from
Hamburg to the Canary Islands where AIDAnova will spend her premiere season.

Numerous impressions of AIDAnova are already available on the website along with exciting videos, 360° views of the various new staterooms, and information about the key milestones of the construction process.