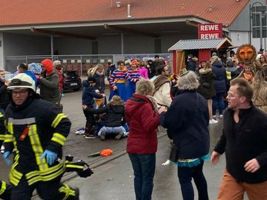 The police in Germany’s small town of Volkmarsen have arrested a 29 years old man, after a car plowed into a crowd of people at a parade on Monday and left more than 30 injured. The car drove into a carnival parade in Germany in what has been described as a deliberate crash. The driver of the car has been arrested and children are among the injured people at the scene in Volkmarsen, about 280km southwest of Berlin, police have said.

According to the German news report, about a third of those injured have been seriously hurt, although an exact number of serious injuries have not been confirmed by authorities. Henning Hinn, a police spokesperson, has said officials are working on the assumption that it was a deliberate act.

Mr Hinn said that there were several dozen injured and among them some seriously and sadly also children. The incident occurred during “Rosenmontagszug”, a German carnival parade which takes place in cities across the country on the Monday before Ash Wednesday.

It comes less than a week after a gunman shot down 11 people, including himself, in one of the worst racist attacks in Germany since the Second World War. Earlier on Monday, commentary on racism featured prominently among carnival floats in western German cities following the far-right attack in Hanau near Frankfurt last week. In Cologne, one float depicted a weeping carnival jester holding a heart with the slogan “our heart beats for Hanau”.