Casino Resort to be open in central Philippine island 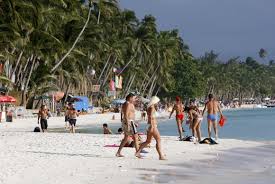 Despite government of Philippines’ plan to shut down its islands to clean up the environment, there is a plan for construction of casino resort on the central Philippine island.

The Macau-based casino operator Galaxy Entertainment Group Ltd announced in December a US$500-million investment in partnership with Philippines-based Leisure and Resorts World Corp, a company that has several interests in the land-based and online gambling sectors in that country.

Andrea Domingo, head of the Philippine Amusement and Gaming Corp (Pagcor), confirmed that the body had already approved the casino license for the planned development.

Ms Domingo told that they are signing the contract for their provisional license before the end of the month. The official also confirmed that the companies had submitted their request for license before a new nationwide pause on issuing further casino permits. The head of the regulator noted also that the mooted shutdown of Boracay would be for only a year, whereas it would take three years to build the casino resort. In a filing on Monday, Leisure and Resorts World Corp said one of its subsidiaries has already acquired a plot of land with approximately 23 hectares (56.8 acres) in the Barangay Manoc-Manoc area of Boracay.

The three departments of the Philippine government recommended last week the closure of Boracay so that the island can be rehabilitated. The recommendation was issued by the Department of Environment and Natural Resources; Department of the Interior and Local Government; and Department of Tourism. Mr Cimatu said the plan was to ensure Boracay was sustainable as a prime tourism destination.