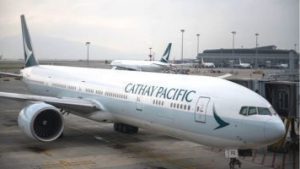 Hong Kong’s flag carrier Cathay Pacific has decided to cut down operations further. More cuts would now be made to its long-haul schedule for the month of April. Nearly 97% of planned passenger capacity has been canceled with the latest move.

Around March 20, the airline already announced that it was reducing capacity by 96% for April and May. The decision comes in light of the coronavirus pandemic as the number of COVID-19 cases continues to rise across the globe. This has also resulted in governments issuing global travel restrictions and therefore, decreased passenger demand. The situation has hence compelled major airlines around the world to temporarily halt their services.

According to the latest memo update, passenger demand has vehemently reduced and the airline carried just 582 passengers in a day as compared to its general daily traffic of 100,000. Cathay staff has already decided to take three weeks of unpaid leave as a cost reduction measure. Chief Executive Augustus Tang and Chairman Patrick Healy will take a 30% cut to his base salary from April to December. Executive directors will also be taking a 25% cut.

However, Cathay Pacific would now run a skeleton schedule, operating services London Heathrow, Los Angeles, Vancouver and Sydney, two times a week. Earlier, the carrier decided to fly to these destinations three times a week in accordance with the previous reduced schedule.

The airline has also mentioned that these flights would be closely monitored and further reductions might be carried out if required. Meanwhile, Augustus Tang, Chief Executive, Cathay Pacific said in a statement that reduction of capacity the carrier’s widebody fleet also means that cargo revenues continue to be well below last year.