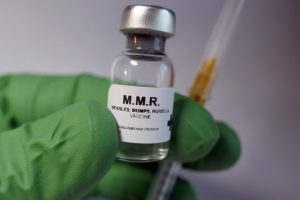 – administration of antigenic material (vaccine) to stimulate an individual’s immune system to develop adaptive immunity to a pathogen.

U.S. Centers for Disease Control and Prevention (CDC) are warning travellers to get their measles, mumps and rubella vaccines after a ‘record high’ number of measles fatalities were reported in Europe. The reminder was published on Monday in the journal Pediatrics.

The CDC issued a global notice in June about increasing measles outbreaks around the world, but it doesn’t have a specific warning about Europe.

The measles outbreak in Europe has been extensive. From January 2018 to June 2018, European countries saw 37 deaths, a record high since the 1990s, among 41,000 reported cases. Low vaccination rates are to blame, the new warning says.

In the first two months of this year, there were 34,300 reported measles cases in the European region, including 13 measles-related deaths, according to the World Health Organization.

The highest concentration of cases is in Ukraine, but the disease has also been reported in destinations such as France, Greece and Italy. Georgia, Serbia and Russia have also reported high case counts.

As per CDC, two vaccinations means the traveller has a 97 per cent chance of being protected against measles. If you need a vaccination and have a trip coming up, the CDC recommends going to your doctor at least a month before you leave. It may take that much time for your body to build up immunity, and you may need that much time to complete vaccine series.