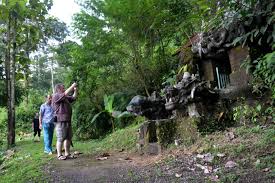 The Hindus of the Mount Lawu area in Karanganyar, Central Java, were preparing to perform the Odalan ceremony, commemorating the establishment of Lingga Bhuana Mahendra Agung Temple on June 28.

The event usually draws residents from the surrounding Mt. Lawu region, including those from the neighbouring Anggrasmanis area, such as Sedondong, Demping, Nringin, Babar and Tempel.

Several of the visitors this year travelled from even farther lands, as foreign visitors were also among those who participated, including Frenchmen Jay Bronson and Pako Echarri, who were staying in Demping hamlet to study Javanese spiritualism.

For three days, Bronson and Echarri stayed at the house of Jero Mangku Jito, a Javanese Hindu leader in Demping, not far from the temple. For Bronson, it was his second visit, following a previous one in April, travelling with 15 colleagues to stay at the village.

The nature’s beauty, local culture and life at Lereng Lawu (the slopes of Mt. Lawu) were among the things that attracted spiritualism enthusiasts from overseas to come, learn and experience the rich culture from the people at Demping.

“At the start, there were only a few foreigners visiting Demping hamlet. It has become more often within the past year. Sometimes within a month there would be two to three group visits of foreigners who want to experience spiritual tourism,” said Endro Ristanto, a local youth who helps organize the visits.

The village had not particularly promoted itself as a destination for spiritual tourism, as visitors would usually learn of the information from posts on social media from those who had visited.

The visitors are welcome to participate in the local ceremonies, including worshiping and palukatan (meditation with water), as well as to visit the surrounding areas, such as a water spring that the locals hold as sacred. Not far from the village are also several historical structures, such as Kethek Temple and Cetho Temple, which date back to the Majapahit Era.