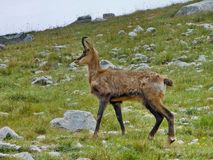 The new draft management plan for Pirin National Park is known to endanger the habitat of the chamois.

There will be construction mostly in the northern part of Pirin above the towns of Bansko and Dobeinishte, also in the Koulinoto area.

The Ministry of Environment and Water has not yet assessed the implications of the increased human interference in protected human area and increased pressure on the endangered Balkan chamois habitat.

To support the fragile and vulnerable ecosystem the Chamois play a crucial role. It is an important part of the food chain and is the only representative of the Pirin National Park fauna that feeds on the shrub.

Both subalpine and alpine zones are inhabited by the Chamois, a greater population density of them is found in the Karst region and in areas with open spaces.

Since 2011, the Chamois has been classified as an endangered subspecies, this is as per the Red Data Book. A field visit organised to the new suggested tourism zones was done by the WWF.

Mainly in the rocky areas among gorges, cliffs and steep slopes the Balkan chamois is found and the most significant threat to them is poaching. Although there is still a decline in practice in certain areas but illegal hunting is a strong factor that impedes the achievement of optimal density for the species.