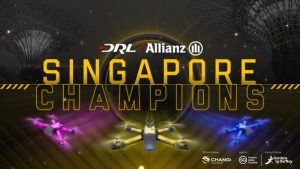 Changi Airport Group (CAG) and The Drone Racing League (DRL) – the world’s only professional circuit for drone racing – today announced a partnership for Singapore to host its first professional drone race, the DRL Allianz: Singapore Champions, at Gardens by the Bay (GBTB) on Tuesday, 26 November 2019 at 7.30pm.

CAG, supported by Singapore Tourism Board, has teamed up with DRL to bring a high-speed drone race and drone technology workshops to Singapore. Drone enthusiasts and adrenaline-seeking fans can purchase tickets to the DRL race, priced at S$98, and experience the immersive, futuristic sport that blends the digital and the real.

The event marks the official culmination of the 2019 DRL Allianz World Championship Season, where the world’s best 12 First Person View (FPV) drone pilots competed across seven levels through challenging courses in legendary sports stadiums. As the ultimate finale, four of the season’s top-ranking pilots will vie for first place of the Singapore Champions race through a complex three-dimensional track around the Flower Dome in GBTB – the world’s largest glass greenhouse.

Accelerating from 0 to 144 km/h in under a second, the pilots will fly brightly lit custom-built DRL Racer4 drones with a transmitter and FPV goggles — which stream a live video feed from a camera mounted on the drone. They will compete across multiple minute-long heats, darting through neon-bright, large-scale gates around temperate blooms, straight past hundreds of attending fans.

In conjunction with the race, a host of innovative and educational workshops will be conducted at the Changi Experience Studio in Jewel Changi Airport on Sunday, 24 November 2019. Guests can look forward to virtually racing a drone on the true-to-life DRL Simulator and engaging with drone pilots and photographers while learning about safe and responsible drone flying in Singapore.

Mr. Jayson Goh, Managing Director of Airport Operations Management, Changi Airport Group, said, “We are thrilled to partner with DRL to bring the 2019 championship finals to Singapore. This is the first major drone racing event to be held here and comes at a time when public interest in – and government and industry support for – eSports is at an all-time high.

“With drones becoming an increasingly significant aspect of our daily lives, this is a great opportunity for the community to learn more about drone technology and the safe and responsible use of drones. We look forward to more people discovering this exhilarating sport and believe the event, which has garnered more than 90 million broadcast views in previous years, will not only enhance Singapore’s position on the global eSports map, but also bring Singapore to the world.”

“Southeast Asia has emerged as the world’s fastest growing eSports hub, and with its booming tech industry and stunning landmarks like Gardens by the Bay, Singapore is a dream location to host a DRL race that’s often described as a real-life video game. We’re thrilled for fans to experience the speed, crashes and technology of professional drone racing live in Asia for the first time, previewing our continued expansion of more live events in Singapore and across the continent in the years to come,” said DRL CEO & Founder, Mr. Nicholas Horbaczewski.

“We are excited to host Asia’s first professional drone race in the iconic Gardens by the Bay, a testament to Singapore’s ability to stage sports events in unconventional venues. This event will add to our calendar of world-class sporting events, and further entrench Singapore’s position as a regional sports tourism hub. Through DRL’s international reach, we also aim to showcase Singapore’s vibrant leisure offerings to the rest of the world,” said Ms. Ong Ling Lee, Director, Sports, Singapore Tourism Board.

“Gardens by the Bay is proud to be selected to host Singapore’s first edition of the much-vaunted Drone Racing League. We hope this will allow our international audience a glimpse of our Flower Dome from another interesting perspective. As a garden that thrives on combining nature and technology, we are always open to new ideas and experiences to surprise and delight our visitors,” said Gardens by the Bay CEO, Mr. Felix Loh.

The DRL Allianz: Singapore Champions race will premiere on Thursday, 31 December 2019 on Twitter via @DroneRaceLeague, and air internationally on top sports networks around the world for DRL’s tens of millions of global fans to watch.

To date, more than 90 million fans have watched DRL in 90 countries worldwide, and thousands of fans have attended live DRL races across the United States, Europe and the Middle East. In 2019, Asia transformed into a fast-growing market for the league, which now engages one million social fans in Southeast Asia and China and reaches two million video views for each of their streamed shows on Weibo and Youku in China alone. The CAG-DRL partnership will help bring responsible drone racing to even more people in the region.