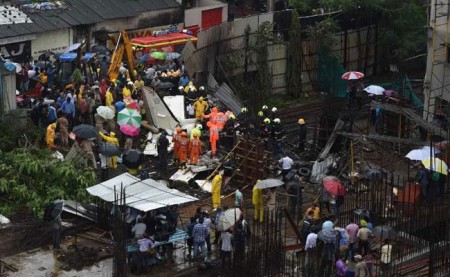 A small plane crashed into a construction site in a thickly populated suburb of Mumbai this afternoon killing five people. The plane was about to land at the Mumbai airport when it crashed some distance away in Ghatkopar, killing all four on board — two pilots and two maintenance engineers.
One man was also killed as the plane crashed at a spot that sits next to several high-rise residential buildings.
The plane, a Beechcraft King Air C 90 twin-turboprop, was sold by the Uttar Pradesh government to a Mumbai-based company, UY Aviation, in the year 2014.
UP official Avnish Awasthi told a leading media platform of India that the deal was done after the plane had met with an accident in Allahabad.
Former civil aviation minister Praful Patel tweeted that the pilot saved many lives at the cost of her own, by swerving to avoid crashing in a busy area.
According to the Directorate General of Civil Aviation, the 12-seater plane had taken off from the Juhu airstrip on a test flight.
In visuals on television and social media, flames and black smoke were seen rising from the wreckage. A large crowd gathered around the debris, many carrying umbrellas in the rain, as firemen sifted through the debris.
There was a huge explosion and the adjacent tree caught fire and the fire spilled on the streets as mentioned by a witness to the news media agency.
He also added that initially they had assumed that an electric box in the under construction building must have caught fire but when they checked out the spot, they found the charred body of a man who apparently was on bike when the plane crashed.
It took over an hour to douse the fire.