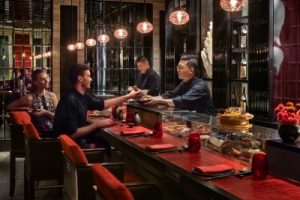 Sintoho restaurant at Four Seasons Hotel Lion Palace St. Petersburg has dramatically changed its concept and raised the bar of its hospitality.

“People always have expectations and we always need to exceed them. We make our food better showing more attention to it,” says the new Chef Hawan Jung. He meticulously tailored the entire guest experience, from the welcoming flowers to the light sorbets by Pastry Chef Nicolas Lambert.

The new menu shows an unexpected vision of Asia with its pure and fresh tastes. Each ingredient plays its own part in adding to the harmony of the whole dish. Hawan Jung recommends guests to start with an appetiser platter called Пикник мирового океана – “A Picnic of the World’s Oceans” – that clearly represents the gastronomical philosophy of the chef: commitment to the terroir, respect for the local ingredients, unexpected product combinations and perfect portion size. The Chef dips an eel into intense pine nut sauce and freshens it up with the seasonal grapes, and as for a tangerine, it’s best paired with pollen.

Hawan Jung’s cuisine is a brilliant mix of different traditions. Inspired by Asian buns, Chef bakes them in the French style. His shrimp and fois gras dim sums come with an amazing onion ice cream that one dips the fried buns into. The Mexican mole blends with Korean chilli, and even the sashimi gets a genuine Russian twist — it is made with osetra caviar and a potato salad garnish.

Seafood plays the leading role in the renewed menu and is served in its best, almost raw form. Even the cod and the king crab from the barbecue section are only slightly touched by the fire. There are also vegetarian options, such as maki rolls with an exotic root scorzonera also known as a black oyster plant. The Chef invented his own method of preparation and serving rice dishes. The Sintoho fusion of risotto and paella is served with a range of condiments, so that the guests can adjust the intensity of the taste to their liking, adding the spice or balancing the umami.

Hawan Jung’s main inspiration is his own childhood spent in a remote South Korean village where his family owned a farm and a garden. “My mother used to cook dinner for 20 persons. My grandfather also loved to invite his friends. At that moment I realised that if you invite guests you must give them the best you can. This is another level of hospitality.” He insists on keeping the family feast tradition at the restaurant, and that is why there are a lot of dishes for two in the new menu.

The team of Four Seasons Hotel Lion Palace St. Petersburg has united to create an unforgettable experience at the Sintoho restaurant. The wine list suggests the best pairs for the chef’s creations and was recently presented with the Award of Excellence by Wine Spectator. Moreover, sommelier Maria Kryshko plans to introduce special tasting sets. This autumn she suggests exploring the evolution of the single terroir German rieslings. Strong beverage lovers will appreciate the choice of sake and signature cocktails created by Four Seasons Hotel Lion Palace St. Petersburg chef bartender. The best light and tempting way to end the dinner is a scoop of ice cream by French Pastry Chef Nicolas Lambert: choose from a subtle lychee aroma, a crunch of the lemon pie, an intense black sesame taste, or a velvety dark chocolate flavour with a hint of saltiness.