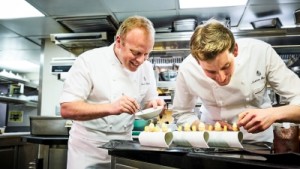 “After assisting Restaurant Le Cinq’s Chefs for a while, David Bizet can finally express his creativity and undeniable talent at L’Orangerie since 2016. The Chef at L’Orangerie took it to a whole new level, and what could have stayed a simple prolongation of the Hotel’s bar is now a not-to-be-missed restaurant. L’Orangerie offers a tailor-made high-end gastronomy, for twenty seats only. David Bizet is without a doubt one of the most talented hotel chefs of nowadays and the quite reasonable prices really make the place worth a visit, before the word spreads,” states Lebey Guide 2018.

“Being awarded two years in a row is an incredible experience. Taking Maxime’s dessert into account, three of our dishes have been rewarded in two years only. It really is a true honour,” says David Bizet.

“The arrival of Maxime Frédéric, a young and talented pastry chef put a cherry on top of this unparalleled dream team,” states Lebey Guide 2018.

“I was already keeping up with the Lebey de la Gastronomie back when I was a commis chef. Winning Best Dessert is a great honour that I can’t wait to share with my team,” says Maxime Frédéric.