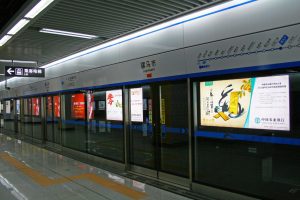 Tracks have been laid and civil works have on Line 18. Meanwhile, Line 17 is at the final stage of civil engineering completion. The installation of the mechanical and electrical systems is also going on with full force. The two lines will be electrified at 25kV ac rather than 1.5kV dc, which is used on existing metro lines.

Line 17 will run from Venus east to Jitouqiao where it will connect with the future Line 9. It will be 26 km long with nine stations. Among those, two stations will be elevated and seven stations would be located underground. Line 18 will be 66.8 km long with nine underground stations and only one elevated station. Line 18 will run south from Chengdu South mainline station to Tianfu Airport. The airport will have two stations, one serving Terminals 3 and 4, and the other serving Terminals 1 and 2.

CRRC has also completed delivery of the 26 trains which it is supplying for Line 18. In the last week of March, type testing of the first train was officially launched. For Line 17, eight trains have been delivered. Out of which, five trains have been commissioned.

In addition, 54 drivers have been recruited to operate the two lines. The drivers have already passed their assessment and acceptance tests. They have also been officially posted.