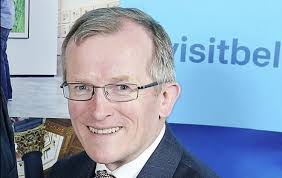 The chief executive of Tourism Ireland has discarded claims from DUP MP Ian Paisley that the cross-border body prefers the Republic of Ireland.

While speaking on Wednesday at the House of Commons NI Affairs Committee, Niall Gibbons said, “We make sure that we give a lot of prominence to NI”.

He tackled questions in terms of the support of Belfast International Airport.

“There’s very much a level playing field, so I don’t accept the criticism at all,” Mr Gibbons said.

Mr. Paisley had mentioned to evidence given to the committee by Uel Hoey, the business development director of the airport.

The MP explained that Mr. Hoey had condemned Tourism Ireland for its dearth of support in endorsing Belfast International as a hub.

While speaking at an inquiry session previous month, Mr Paisley called for “an aggressive marketing strategy” in Dublin to attract Irish-American tourists to Northern Ireland and “put it right back in their face”.

Tourism Ireland was set up as one of the “six areas of co-operation” under the framework of the Good Friday Agreement, and is accountable for advertising the island of Ireland to Great Britain and at an international level and supporting Northern Ireland to realize its tourism potential.