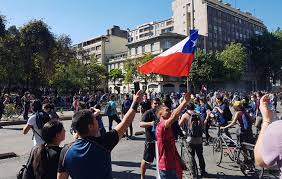 Chile entered the third week of civil unrest over increasing costs of living and quality of social services. Some people had makeshift shields for safeguarding themselves from pellets fired by police, while choppers had searchlights on protesters.

Cumbres, like other hotels across the city, was trying to offer clients a normal service in the midst of chaos. More than two weeks of frequent violent protests has seriously damaged the image of Chile that President Sebastian Pinera described as an “oasis” of calm in Latin America just one month ago. The demonstrations forced the government to call off two global conferences in Santiago that would have attracted a lot of visitors.

Chile’s Red Cross estimated the total number of injured from the protests at more than 2,500, while the Chamber of Commerce reported ransacking of 384 supermarkets.

Hotel and tour groups have witnessed 40% of reservations for this spring and summer canceled in the past few weeks with the mounting violence.