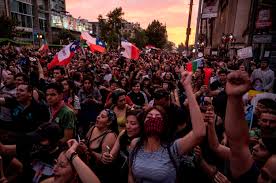 The recent unrest in Chile will affect the tourism industry according to the officials. The president Sebastian Pinerato has pledged sweeping social and economic reforms after protests over a hike in metro fares spun out of control earlier this month.

Yesterday the Chileans again took to the streets, thousands poured into plazas and main boulevards were shut down.

Against the inequality in Santiago, more than a million Chileans marched peacefully over the weekend. This was the largest protests since the country returned to democracy in 1990.

The undersecretary of tourism maintained touristic activity in Chile is “operating normally” after the unrest.

Some business  in Santiago remained close and public transportation was gradually resuming its usual operations but most metro stations  were open.

Arturo Merino Benítez International Airport is fully operational, and all airlines’ flights were functioning according to schedule.

The minister said that the  bus terminals are operating normally throughout the country.

But large demonstrations are expected in Santiago and other cities.

The FCO said that you should follow the instructions and advice of the local authorities, remain vigilant, monitor local media for updates and avoid protests and demonstrations.