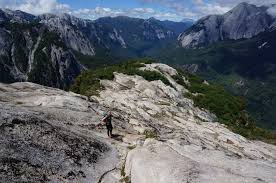 To boost tourism and highlight the need for conservation Chile has launched a huge scenic route through its Patagonian wilderness.

Around 2,800 km is covered by the Route of Parks from the city of Puerto Montt down to Cape Horn.

Tompkins Conservation, set up by the US billionaire Douglas Tompkins and his wife Kristine, is the brainchild behind the trail.

Earlier, the foundation donated huge  amounts of land to Chile’s government and  a network of 17 national parks, the new route Patagonian Route of Parks will connect all.

The region is known for lakes and rich array of wildlife plants and after the North Face and Esprit co-founder passed away in a kayaking accident in Chile three years ago, the foundation was set up which bought great swathes of land to preserve it.

In 2017 Kristine  signed over  a large amount to the Chilean government to construct a series of connected parks and trails.

The new hiking trail will encompass a huge area around the size of Switzerland as the land was used to create 17 national parks.