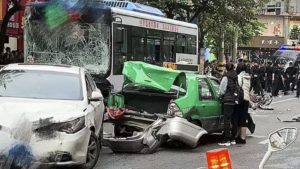 Around 8 people were killed after a hijacker with a knife drove a bus into pedestrians in a southeastern Chinese city, Longyan .

It is also reported that 22 others were injured, one seriously, in the Tuesday afternoon attack in Longyan in Fujian province, about 1,000 kilometres (600 miles) south of Shanghai. The attacker was captured, a police statement said. It did not say how many fatalities occurred aboard the bus and how many among pedestrians.

It is said that police have identified the attacker as a 48-year-old unemployed man. The news service said that initial investigation had found that the man had had a conflict earlier in the day with an official of a neighbourhood committee with whom he and long been at odds.

A hijacker carrying a knife has been detained and is being investigated by local police.

The incident happened at about 3.20pm in the city of Longyan, the local Minxi Ribao newspaper reported. A policeman was among the five confirmed dead.

Blood could also be seen on the steps of the bus, which had been stopped in the middle of a road.

The hijacker had attacked a female passenger before taking control of the bus, Duowei reported.

The suspect has not been identified and Longyan public security bureau declined to comment when contacted by AFP.

China has suffered a spate of similar incidents this year.

In late November, a car ploughed into a group of children crossing a street in front of an elementary school in the northeastern Liaoning province, killing five people and injuring at least 19.

The driver said he “chose his victims at random” and had reportedly been contemplating suicide due to domestic troubles before the tragedy occurred. In October, three people were killed when a man fleeing after committing a stabbing drove into a crowd and attacked onlookers in the eastern province of Zhejiang. The month before, a man ploughed a truck into a crowd in Hunan province and went on a rampage, attacking onlookers with knives and a shovel. Eleven died and 44 were injured.

Gruesome car accidents are common in China, where transportation authorities have struggled to enforce safety regulations, which are often flouted or go unenforced. The violent crime has also been on the rise in China in recent decades as the gap between rich and poor has widened rapidly.

The studies have also described a rise in the prevalence of mental disorders, some of them linked to stress as the pace of life becomes faster and support systems wither.