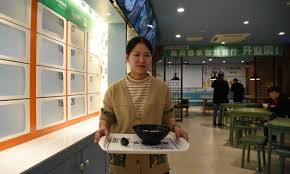 China opened its unmanned train station eatery as Spring festival travelling rush began. This is a 24-hour restaurant with no chefs and waiters opened in eastern China’s Shandong Province to serve food to huge number of travellers during the Spring Festival travel rush.

The payment is made by scanning a QR code using mobile phones. The travellers’ selected meals, which have been pre-cooked, will then be microwave-heated in the vending machine for under a minute. More than 2,000 vacuum-packed meals can be stored in the eight machines, which will be replenished by employees from a food supply company. The main offerings include spicy beef, braised pork and chicken curry, according to nationalist tabloid Global Times. The travellers can also choose white rice, fried rice, noodles or salad to go with their main meal. There are also entrees, sides and drinks. A smart management system has been installed at the restaurant, with which big data analysis will be carried out on travellers’ preferences. The information will then be used to tweak the menu to better suit their tastes.

China’s Spring Festival travel rush, also known as chunyun, started on Monday, unleashing the country’s largest seasonal migration of people as individuals studying or working in the cities return to their hometowns for China’s most important traditional holiday. The travel rush began 15 days ahead of the Spring Festival, or Chinese New Year, which falls on Feb 5 this year. An estimated 413 million trips will be made via China’s railway system during this period, up 8.3 per cent year-on-year.