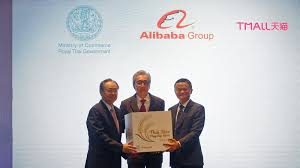 Thailand Deputy Prime Minister Somkid Jatusripitak has inked a deal in Shanghai with Chinese e-commerce giant Alibaba. This step has been taken following decline in numbers of visitors, notably from China, to Thailand during the traditional tourist high season.

On Nov 11, or “11/11” – when Chinese people celebrate “Singles Day” – Alibaba will launch a 20-second video on its website to encourage Chinese tourists to travel to Thailand, he said.

The video is expected to reach as many as 800 million Chinese, Somkid said after his meeting in Shanghai yesterday (Nov 8) with Alibaba’s executives, including its founder and president, Jack Ma.

The Tourism Authority of Thailand had already been instructed to create the video, Somkid said, adding he himself might be featured in the presentation to convey the message of convenience and safety in travelling to Thailand.