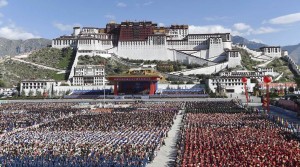 The Chinese companies have participated in the construction and operation of a total of 42 ports in 34 countries under its Belt and Road initiative launched five years ago.

These ports include Piraeus Port in Greece, Hambantota Port in Sri Lanka and Gwadar Port in Pakistan, Wu Chungeng, the ministry’s spokesperson said.

This foreign policy plan of Chinese President Xi Jinping, the Belt and Road initiative was proposed in 2013 to boost China’s trade with some 70 countries in Asia, Europe and Africa through massive investments in railroads, ports and power plants.

It consists of a land-based Silk Road Economic Belt running from China’s western parts towards Europe and the Middle East, and the 21st Maritime Silk Road that links China’s coastal parts to the South Pacific and Australia and to Europe and Africa through the South China Sea and the Indian Ocean and the Arctic.

The maritime ambitions reflect the fact China is the world’s largest exporter and the second largest importer, and wants to secure access to infrastructure and resources that it considers critical to its economic development.

A large part of the international port investments has been carried out by state-owned companies, especially China Ocean Shipping Company (COSCO) and the China Merchants Group.

COSCO owns and operates Greece’s Piraeus Port, among others, while ports managed by China Merchant Groups include the Hambantota Port, which Sri Lanka gave to China on a 99-year lease last December after being not able to pay back loans to Chinese banks. But the port shopping spree by state-controlled Chinese companies has raised concerns in recipient countries, particularly in Asia and Europe.

The European Union is currently considering a mechanism that would allow reviewing foreign direct investments to critical sectors and infrastructure, including technology, power plants and ports. The legislation could be adopted by the end of this year.