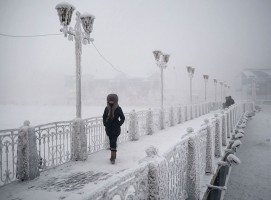 If you are complaining about the wintry chill, dare to visit Oymyakon, a village in the Russian region of Yakutia, better known as the world’s coldest village. It has reached near-record lows, so much so that their digital thermometer broke as a result.

Named after the Oymyakon River, it transliterates into “unfrozen patch of water; place where fish spend the winter.”

The digital thermometer in the village was installed last year to appeal to tourists. However, as the temperature reached as low as -62C, the thermometer broke down. As per records, the lowest ever temperature recorded was -68C in Oymyakon in 1933.

In 2013, the freezing conditions of Antarctica reached a new low which was recorded to be -94.7C by satellite data of NASA.

Chinese tourists going for a splash in scantiest of the dresses is making the residents worry about the health conditions post such craziness. In a social media post, tourists are seen to bathe and doing ballerina in minus 41.

Oymyakon village has about 500 people living in the village.