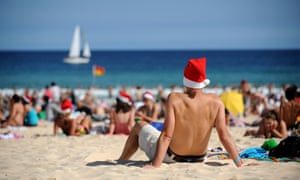 The heat waves have been forecast for much of the country with some capitals expected to see runs of days all with maximums higher than 30degree Celsius — and further inland expect more like 40 degree Celsius.

While conditions are expected to be calm through the week — meaning no more thunderstorms and golf-sized hailstones — it’s also going to be painfully hot.

The Sky News Weather meteorologist said that ALL of the models are predicting a ridge of high pressure for southern Australia for Christmas Eve, Christmas Day and Boxing Day.

The high-pressure systems generally lead to dry conditions and the sheer size of the ridge means its effects could be felt from Tasmania all the way to southern Queensland and southern Western Australia.

This is the start of a prolonged and an intense heat wave. The widespread 40-45 degree Celsius heat, daily records potentially broken and longevity records could also be broken,” Sky News Weather meteorologist Tristan Meyers said.

Approaching Christmas, the Bureau of Meteorology has forecast heat waves across swathes of Queensland, the Northern Territory and down into much of NSW. South Australia will cop the strongest heatwave with temperatures in Adelaide expected to push into the 40s later this week. Towns in the north of the state, including Marree and Oodnadatta, are expected to hit 42degree Celsius tomorrow.

The southern state will experience its first sustained period of hot weather this summer, with the mercury staying high across much of the state for at least the next seven days. Meanwhile, Perth and Far North Queensland are also likely to be as hot as a Christmas turkey.

And in some inland Australian towns, heat records are set to be broken. The day after Christmas, Coober Pedy is expected to have six days of 40C-plus weather with four of those hitting 46 degree Celsius. Mildura, Victoria is also gearing up for a six-day heatwave from Boxing Day with the mercury struggling to drop below 40C.

It will be wetter in Northern Australia, with the remnants of Cyclone Owen still likely to be whipping up some rain.

Senior BOM meteorologist Claire Yeo said despite the “beautiful” days ahead, Aussies shouldn’t become complacent. The Christmas could mark the start of a low intensity heatwave inland, with temperatures increasing from the northwest coast of Western Australia extending down into the southeast, she said.