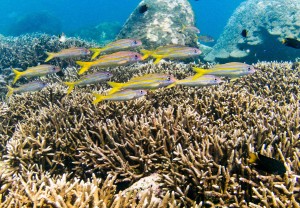 Trinco Blu by Cinnamon is the perfect getaway for guests seeking to indulge in the unmatched serenity of some of the most beautiful beaches of the eastern coast of Sri Lanka. If you are seeking a bit of sea-side adventure, booking your holiday at Trinco Blu will not disappoint. The magnificent hotel offers a complete package of adventure-based activities like catch and release fishing, whale and dolphin watching (marine mammal safari) and snorkelling in the sea surrounding the Pigeon Island in Trincomalee.

Pigeon Island, a scenic isle situated in the eastern coast of Sri Lanka, has increasingly become a popular snorkelling site, since the end of the civil war in 2009.  Situated around 13 km away from Trinco Blu by Cinnamon, Pigeon Island is indeed a snorkeler’s paradise, with live coral reefs inhabited with over 100 species of corals. This splendid marine ecosystem is also home to several exotic marine animals with over 300 species of fish and a variety of sea turtles.

The Cinnamon Nature Trails (CNT) team conducts responsible snorkelling and sea-side tours. During this exciting 3-hour excursion, you have the opportunity to snorkel to your heart’s content with shoals of colourful fish to keep you company. You can also observe species such as the juvenile and adult black tip reef shark and a variety of turtles such as the Hawksbill Turtle, Green Turtle and the Olive Ridley Turtle. To make the best of your snorkeling experience, the best time to visit would be from March to September.

Cinnamon Nature Trails is the award-winning wildlife adventure tourism division of Cinnamon Hotels & Resorts which also serves as one of Sri Lanka’s leading eco-excursion providers. CNT’s in-house naturalists, experienced tour guides and wild life photographers provide excellent guidance during the sea-side adventures and ensure a memorable experience without causing any harm to the natural eco-system. Additionally, Cinnamon Nature Trails consistently works with the Department of Wildlife Conservation of Sri Lanka to protect the sensitive habitat of the coral reefs around this beautiful island.