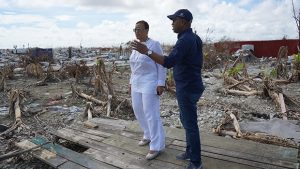 Secretary-General Patrica Scotland will be attending the inter-sessional conference of heads of the Caribbean Community (CARICOM) in Barbados this week as a special guest. From the 15 CARICOM members, 12 are in the Commonwealth.

The Caribbean leaders will be reassured by the Secretary-General that the Commonwealth will keep fighting for bold climate action on the global stage.

Despite the ambitious pledges countries received limited funds to improve response to climate change and will focus on how the climate crisis will destabilise the economic growth which will lead to food insecurity, stressed resources and impaired livelihoods across the Commonwealth.

As per the Climate Funds Update till February 2019, less than a quarter of the $26 billion was deposited for the climate action was disbursed.

On the current Commonwealth initiative, Patricia Scotland will brief the Caribbean leaders and will help the region to tackle the effects of climate change and external shocks like disaster and financial crisis.

To deal with climate change the  Commonwealth has helped five Caribbean countries access more than  $27 million in funds.

Patricia Scotland said that the Caribbean is increasingly bearing the brunt of frequent, long lasting and intense weather pattern. This indicates that business-as-usual is no longer an option if the region’s beautiful islands and vibrant communities are to flourish and prosper for the benefit and enjoyment of future generations.

After a category five storm Hurrican Dorain devastated many of the nation’s island the storm had claimed 73 lives causing $3.4 billion in damage.