Cocoa Village may get $15 million boutique hotel with ‘sky bar’ 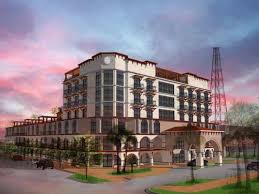 Jack Brown of Chagrin Falls, Ohio is planning to build a ultra luxurious 100-plus room boutique hotel on the site of the former Cocoa City Hall in Cocoa Village.

The early plans call for a five-story structure with a “sky bar” on the top level overlooking the Indian River Lagoon and what could be a re-developed marina just east of the hotel.

The project, estimated at $15 million, would involve a brand hotelier, like a Marriott or Hilton, and come with three floors of parking.

The developer, Jack Brown of Chagrin Falls, Ohio, outside Cleveland, introduced the plan and answered questions at a public meeting Monday night at Cocoa City Hall.

He’s still in talks city officials and hopeful of getting a developer’s agreement to proceed, along with height variance that would allow the structure to go a few feet above the city’s limit of 65 feet.

The early indications are that height isn’t as much an issue as is the exterior design keeping with the flavor of Cocoa Village.

If things go according to Brown’s schedule, construction could start later this year with an opening planned for late 2019.

Brown, who has developed about 35 hotels across the United States, also has a hotel project on Fiske Boulevard (near Ruby Tuesday’s) in the works. That project is aimed at travelers off Interstate 95 and the expected traffic for sporting events in nearby Viera.

Upon revisiting the area, he took note of the growth by the riverfront and his opinion about the village took a new turn.

Last Monday about 75 people attended an informational meeting by together by the Cocoa Community Redevelopment Agency about the project. Those who attended were asked for a show of hands if they favored Brown’s project and by far most reportedly were in the affirmative. Though in it’s early stages the project has support among some city officials.