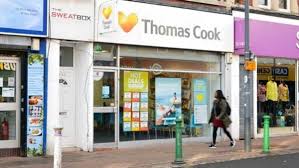 The president of the Travel and Tourism Association of Goa, Savio Messias, said Monday that the collapse of Thomas Cook, one of the oldest tourist travel companies in the world, will deal a “big, big blow” to the Goan tourism industry.

The head of the travel and tourism industry association in Goa, a state where nearly 1.48 lakh British tourists landed on holiday in 2018, added that flights chartered by the UK-based Thomas Cook ferried nearly 2,000 tourists every week to Goa, during the tourism season from October to March.

“Last year, they were getting around 2,000 passengers a week. On an average, a passenger stays for around 14 days, sometimes 21 days and sometimes seven days also. If you count the number of room nights, it is very, very large,” Messias also said.

British tourists rank second in the list of international arrivals in Goa, after Russians.

Goa has been a traditional winter destination for Europeans, especially from Russia and UK, who arrive in the coastal state to beat the freezing cold winters in their countries.

Several hotels, according to Messias, were likely to face hardship in Goa, because they were entirely dependent on Thomas Cook for filling up their accommodation.

“Many hotels were depending entirely on Thomas Cook and they had built up a very good rapport. Repeat clients were coming back to the same hotels. It was a very good business which we are going to miss,” Messias said.

Incidentally, the reports of the collapse of the 178-year-old travel company come on the heel of dipping international tourist arrivals numbers over the last two years.