Congress to meet on draft of Goa tourism master plan 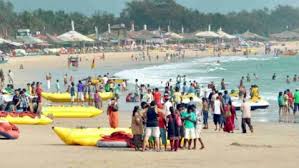 The Opposition leader, Mr Chandrakant Kavlekar, has convened a meeting of the Congress legislative party (CLP) along with the stakeholders in the tourism industry to discuss the draft tourism masterplan on Tuesday next.

Mr Kavlekar said that at the meeting, the party would seek suggestions on the policy and will get inputs from the industry. He also said that CLP members would discuss the policy and have their recommendations ready for the government. “Once we decide, we will recommend what needs to be deleted and added in the tourism policy,” he said.

Kavlekar said that the party has sought time from the government to give their objections as well as suggestions. “Policies are made once and not every day, so we need time to study before we express our opinion,” he said.

Recently, the tourism department presented the Goa tourism policy to MLAs and ministers, after which Congress MLAs sought 10 days to voice their opinions and suggestions on the draft policy.

However, MLAs, especially from the ruling dispensation, criticised the draft policy. Deputy speaker and Calangute BJP MLA, Michael Lobo, said the consultants who framed the policy had not kept Goa’s interests in mind.