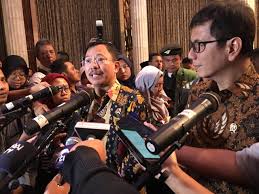 Coordinating Maritime Affairs and Investment Minister in Indonesia Luhut Pandjaitan said that the corona virus epidemic around the globe has affected Indonesian tourism, with estimated losses of around US$500 million.

Luhut said that the Indonesian government has created tourism packages for reducing the losses.

Around 173 million Chinese tourists travel around the world annually, generating a global income of around $270 billion, said the minister.

Luhut added that Indonesia is on a campaign for boosting Chinese tourist numbers to around 10 million people in the future.

“Chinese tourists spend more money per person now than American tourists,” Luhut said.
As of Monday, more than 2,500 deaths due to the virus has been confirmed in mainland China, while almost 30 people outside mainland China have died after contracting the virus. More than 77,000 infections have been recorded worldwide.

Indonesia imposed a travel ban to and from mainland China on February 5; however, many Chinese nationals have prolonged their stays in Indonesia, getting hold of emergency stay permits that would help them remain in the country for another 30 days after their visas expire.