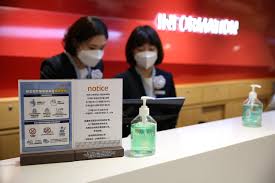 Louis Vuitton, in the Galeries Lafayette department store in central Paris, is a favorite stop among the popular shopping destinations for Chinese tourists to France. But now, the effect of corona virus is evident everywhere, creating potential economic impact on lucrative businesses derived from Chinese tourists.

From the streets of Paris to the wineries of Burgundy, from the German town of Füssen near the fairy tale castle of Neuschwanstein to a shopping outlet in Oxfordshire, England, the numbers of Chinese tourists have dropped visibly ever since Beijing banned overseas group tours on January 27.

The effects, especially on businesses catering to the ever-growing Chinese market, have been instant. Last week, the Italian government considered providing assistance to tour operators who are hit badly from the outbreak.

Italy’s tourism sector benefited to a great extent from China’s economic rise over the past two decades. On January 21, Italy’s minister of culture and tourism, Dario Franceschini, and his Chinese counterpart, Luo Shugang, inaugurated a yearlong multifaceted program for boosting cultural exchanges and tourism between the two countries.

Direct flights between Italy and China had been expected to triple over the year, increasing to 108 per week from 56.

But only 10 days after the ministers met, Italy suspended flights to and from China, with the corona virus outbreak spreading around the world and the death toll continued to go up in China.

With more nations prohibiting travel to and from China, effectively quarantining the world’s most populous nation, the ever-present large groups of Chinese tourists, have started disappearing from the European landscape.

The corona virus is showing less signs of abating; hence, tourism-dependent businesses across Europe are bracing for empty hotel rooms and stores in the coming high season.