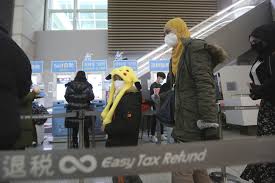 Corona virus that has given rise to travel restrictions in China is sending shockwaves through Asia’s tourism industry, which has become increasingly dependent on growing numbers of Chinese visitors.

At least 81 people have died since the new strain of corona virus emerged in China’s Wuhan, and millions are now under an effective quarantine, with all flights in and out of the city postponed. There is also a ban on Chinese tour groups domestically and abroad.

The measures come in the middle of a boom in Chinese foreign travel, with the number of tourists from the country going up almost tenfold since 2003.

Businesses in destinations depending on the huge numbers of Chinese tourists are already feeling the heat, with “deserted” beaches and shops, and concerns about the future.

The outbreak is akin to the SARS crisis, which paralyzed regional travel and battered local economies from late 2002. That time, Chinese tourist numbers declined by around a third.

In Japan, the drop in Chinese visitors has already been felt in Asakusa, a popular tourist destination near the Sensoji temple.

It will now be “very difficult” for Japan to achieve its target of 40 million tourists in 2020, said Yuki Takashima, an economist at Nomura Securities.

The effects will be felt beyond hotels, restaurants and tourist sites, since many Chinese tourists visit Japan specifically for shopping purposes.

However, Japan would still be better placed to weather the storm compared to another top destination for Chinese tourists, i.e. Thailand.

Tourism accounts for 18 per cent of Thailand’s GDP, with Chinese holidaymakers making up more than a quarter of total arrivals.

The country’s tourism minister has already warned a crisis similar to SARS, and it might cost an estimated US$1.6 billion, and the effects are already visible in Phuket.