Home » Costa Cruises to base three ships in South America

Costa Cruises to base three ships in South America 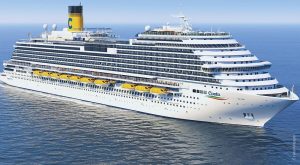 Costa Cruises Costa Luminosa will join Costa Fascinosa and Costa Pacifica in South America during the winter of 2020-2021. This is supposed to help boost the cruise line’s capacity in the region.

As per the schedule, Costa Luminosa will leave Venice, Italy on November 8, 2020 and it would sail a transatlantic crossing to Santos in Brazil. The ship is going to offer a series of seven-night cruises to Itajai, Brazil; Buenos Aires, Argentina; and Montevideo, Uruguay.

Arriving in Santos, Italy in mid-November, Costa Fascinosa will offer voyages to destinations in the north of Brazil, such as Salvador and Buzios. On the other hand, Costa Pacifica will leave Genoa, Italy on November 13 and it will be then sailing itineraries to Argentina, Uruguay, and the southern part of Brazil.

The general manager for Central and South America at Costa Cruises, Dario Rustico, said that the arrival of the Costa Luminosa for the 2020-2021 winter season is a strategically-motivated investment in the South American market. He said that the market had great potential for growth.

He said that all the three ships were scheduled to be re-positioned in April 2021.

The Costa Crociere Group is part of the Carnival Corporation & Plc Group, the world’s largest cruise operator, and it has also got featured in the London and the New York stock exchanges. With a fleet of 103 ships, the Group happens to be the parent company of the Costa Cruises Line and AIDA Cruises brands. Headquartered in Genoa, the Group operates at global level, mainly in the Mediterranean, Northern Europe, the Baltic Sea, the Caribbean, Central and South America. Plans are afoot to launch six next-generation ships to the fleet.  What sets the Costa Cruises apart from the other cruises is its Mediterranean inspired design and festival atmosphere. It’s itineraries last anywhere from two to 112 nights. While some ships of the Group have intimate ambience and relaxed atmosphere, some are more crowded and offer action-packed itineraries.