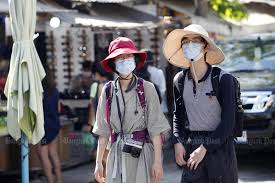 The novel coronavirus outbreak, first reported in Wuhan, China, has started to impact Indonesia’s tourism sector as the country has recorded a slower growth in foreign tourist arrivals following bans applied to visitors from China.

Statistics Indonesia (BPS) revealed on Monday that tourist arrivals numbered 1.27 million in January, around 5.85 per cent higher than the 1.20 million recorded in the same month in 2019. However, the growth is much lower than the around 9.5 per cent increase in arrivals during January 2019 compared with the same period in 2018.

“The coronavirus impact can only be significantly seen in the last week of [January]. Some countries saw a decline [in tourist arrivals], like China, Malaysia and Singapore, but in total, they still record an increase,” said BPS deputy for statistics distribution and service Yunita Rusanti in Jakarta.

“Why is it increasing? Because there was the Chinese New Year [holiday] and tourist arrivals usually increase [during this period],” she added.

The statistics agency data showed that the number of Malaysian tourists fell 10.6 percent year-on-year (yoy) to 206,532 arrivals in January, around 16 percent of the total visits, the highest among other countries of origin.

Chinese tourists trailed behind Malaysians at 181,281 arrivals, a slight rise of 1.46 per cent yoy, a far cry compared with the 73 percent annual growth recorded in January 2019.

Indonesia has closed its borders for those traveling to and from China in a bid to contain the spread of the pneumonia-like illness. President Joko “Jokowi” Widodo announced on Monday morning the first two COVID-19 positive cases on Indonesia’s soil after a Japanese tourist allegedly spread the virus during a visit to Jakarta.

The BPS also revealed that passengers on international flights increased by 12.13 per cent yoy in January to 1.68 million, higher than the 11.27 per cent annual growth recorded in the first month of 2019.

The government has announced a stimulus package worth Rp 10.3 trillion (US$742 million) to support the country’s economic growth. The package will include aid for staple goods programs and housing loans and payment subsidies for the bottom 30 percent of people in the income bracket to maintain consumer spending.

Consumer spending contributes more than a half of Indonesia’s gross domestic product (GDP).