Craveiral – a hotel with emotional connect 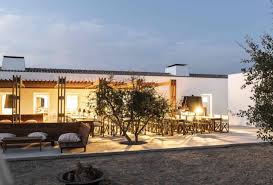 It took half a decade and a journey across an ocean to find a hotel that more profoundly embodies an idea. And it’s not a traditional luxury hotel in a world capital but an endearing small resort in a remote area of a small country at the south-western tip of Europe.

Craveiral is not particularly lavish or even put together properly. The owners largely left the rugged landscape of Portugal’s Alentejo region as it was, going as far as to build paths and orient room blocks around gnarled trees instead of taking them down. The 38 rooms are simple—what I might call farmhouse chic, with unvarnished woods, soft textures and lots of cork—though some also have quietly luxurious Hästens beds.

Simplicity, nature, silence and wide-open spaces are the new luxuries. And at Craveiral they combine to create feelings of connection to nature, to loved ones, to strangers who become friends and belonging. There’s a profound slowing down. There’s the emotion of content.

Opened in July, Craveiral is the passion project of a Lisbon lawyer with dreams of being a farmer. Pedro Franca Pinto found the land that has become Craveiral in 2010, when it was an unloved field of carnations, and he was in an office feeling a strong desire to roll up his sleeves, get his hands dirty and give new life to something. (Cravo is Portuguese for “carnation.”) Even now, he’s at his happiest when driving a rough-and-tumble jeep around the property and nearby area or when manning the pizza oven or the barbecue grill.

He is also someone who has strong feelings about plush towels (he insisted on 600-gram specimens) and good food and wine (he’s a partner in Lisbon’s popular restaurant By the Wine). And his business partners, Luís Kapinha and João Canilho, a designer and a financial expert at a multinational, know their way around hospitality. They own Casa Amora, a charming boutique guesthouse in Lisbon. At least one of the three is often on site, offering a welcoming hospitality that never feels forced.

Although Craveiral is not just another hotel, nor just a place to sleep, it’s worth noting a few features: a massive fireplace in the main farmhouse, where guests gather for drinks many nights; an organic garden that supplies the kitchen; an orchard; a well-being centre; and farm animals. The four swimming pools include a lavishly large one near the main house and a beautiful heated one inside the wellness centre.

There’s also one docile horse, called Quinoa, for solo rides around the property. So Quinoa went where he liked, which turned out to be the construction site for the final block of rooms. Even the tractors and construction equipment had a certain charm here—they give an understanding that places like Craveiral don’t just emerge spontaneously but are the result of dedicated, sometimes difficult work.

That’s something else that’s important to Pinto. He acquired the land around the time he had children, and his desire is to leave them a legacy that is more emotional than material.

He wanted to set an example that effort, commitment, willpower and determination can help them realize goals and dreams. He wanted to prove that it is possible to be successful by respecting financial and environmental sustainability.