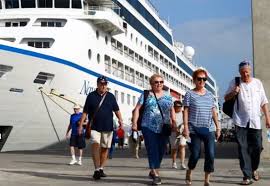 Cape Town is upbeat about the future of the city, as an important stopover port of choice for cruise liners.

In January 2019, cruise ships made 17 stops in the city’s port, a month that highlights the peak season of cruise ship in Cape Town, which conventionally runs from October to April.

Between October 2018 and January 20, more than 17,500 people disembarked in the city from vessels carrying 6,562 crew members. Over17,500 people embarked on ships in the same period.

To quote Western Cape minister of economic opportunities Beverley Schäfer, “We’re seeing cruising growing in popularity around the world, and we’re also starting to see both an increase in local cruising along our coast, as well as increased numbers of international operators using Cape Town as a turnaround port. Confirmed cruises for the next few years have also shown real growth and we are very positive about the potential of this industry.”

Within the luxury liners to have embarked the city are the Queen Elizabeth, the World Odyssey, the Europa 2, the Seven Seas Explorer, the Nautica and the Amadea.

Last week, the MSC Musica, had to holdup docking due to rough winds, was finally able to dock early on Saturday.

Also, the Ocean Dream, known as the Peace Boat, docked at the weekend.

Other vessels due to call this season include the Queen Victoria, the Silver Cloud, the Pacific Princess and the Viking Sun.

“As a province our aim, through Project Khulisa, has been to grow tourism as a vehicle to stimulate the economy and create new jobs, and cruise ship tourism is helping us to do this. The Western Cape tourism industry sustains more than 300,000 direct and indirect jobs, and by increasing the number of cruise liners visiting Cape Town, we can create further opportunities for work and skills development,” said Schäfer.