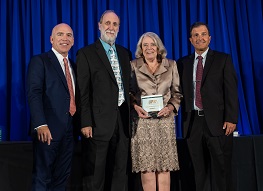 CruiseOne franchisees Bob and Bobbye Haupt were recently honored by the International Franchise Association with its annual Franchisee of the Year Award.

“When we opened our travel agency franchise in 1990 we knew that our success would always be under construction and that ultimately the client will be the judge of if we are a successful franchise,” said Bob Haupt, CruiseOne franchise owner. “We are honored that the IFA and CruiseOne have recognized our 30 years of providing our clients with the best advice and guidance. This is not an end but a new beginning.”

Honorees are selected based on their outstanding performance and the contributions they have made to enhance the growth and development of franchising. The Haupts were honored because they are not only top producers, but role models for all CruiseOne franchisees. They are always willing to share their expertise and secrets to their success with other franchisees.

“Bob and Bobbye have been franchise owners for almost 30 years and we were thrilled to have them represent CruiseOne in Washington, D.C.,” said Drew Daly, senior vice president and general manager of CruiseOne. “They exemplify what it takes to be a successful franchise owner – a strong work ethic, team-player mentality and commitment to continuing education within the industry.”

“The strength of the U.S. economy significantly relies on the hard work of franchisees,” said IFA President & CEO Robert Cresanti.  “IFA is proud to recognize the outstanding efforts of Bob and Bobbye with the Franchisee of the Year Award and thank them for their work in the promotion of franchising as well as for their daily contributions that not only showcase how local business owners propel the economy, but also foster community ties throughout the U.S.”

The Haupts were one of 30 franchise owner-operators recognized at IFA’s Franchise Action Network Annual Meeting in Washington, D.C. which brings together more than 400 franchise business leaders to raise awareness with policymakers and other D.C. influencers about the industry’s continued success and economic contributions.