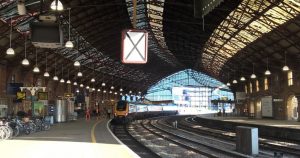 Cyclists who have left their bicycles at Bristol Temple Meads station for long periods of time without using them are being warned that they will be removed and given to charity if they are not moved.

The cull is necessary to free up additional space for cyclists and station staff have placed notices on all bikes at the station, advising owners that they may will be removed from Tuesday 18 December.

Any bike left with the notice still attached will have its lock cut and be bikes removed from the racks.

The bikes that are removed by station staff, will be stored securely for one month and if they’re not collected during this time, they will be donated to charity.

The layout of the bike racks at Bristol Temple Meads has changed in recent months owing to the installation of the new ticket gates. These are at Queen Anne Gate and by Bonapartes Café to ease congestion at busy times. These will be in use from Monday 17 December.

A new set of racks are now available for use, located outside the station, near the new exit at Queen Anne Gate and the British Transport Police Office.

The number of bike racks at Bristol Temple Meads has recently been increased to 294 meaning there are 588 spaces.

Andy Phillips, Network Rail station manager, said; “Network Rail want to provide the best possible experience for passengers using the station and that means ensuring all our bike spaces are available and not taken up by abandoned bikes, or those stored here for extended periods.

Network Rail will start to remove the long-abandoned bikes with notices, from Tuesday 18 December and will continue to cut off bikes over the Christmas period, so I encourage anyone that has left their bike at Bristol Temple Meads for a long time, to move it before Monday.”

Anyone with any issues or concerns can ask station staff who will be happy to help.