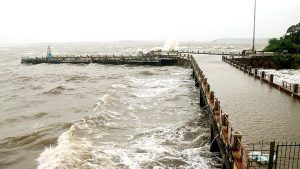 According to the India Meteorological Department (IMD), Cyclone Kyarr is the first Super Cyclonic storm in Arabian Sea in the past 12 years which is now moving west-northweastwards towards the Oman Coast.

Currently the system is lais near latitude 17.0°N and longitude 68.2°E over east-central Arabia Sea about 540 km West­-southwest of Mumbai and 1500 km east of Salalah (Oman) as per the Skymet Weather.

During the next five days the IMD has forecasted that it is likely to move westwards towards Oman coast and the cyclone will maintain the intensity of a Super Cyclonic storm till today which will weaken gradually after October 28.

Saturday onwards the cyclone rapidly intensified as per the World Cyclone Warning Center, it has now become a Category 5 on record in the Arabian Sea.

Over the next few days very heavy to heavy rainfall is likely in Kerela and Karnataka, the isolated places over Chikkamagaluru, Hassan, Kodagu and Shivamogga districts of south interior Karnataka.

In the wake of Cyclone Kyarr, the Indian Coast Guard has rescued 19 fihsermen and escorted more than 2100 fishing boats to safety at various points in the west coast.